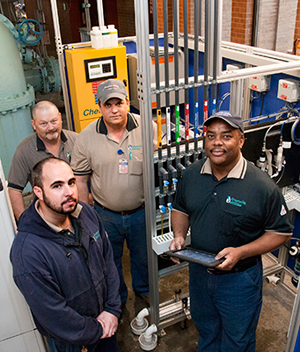 Water from the Tar River is pumped into the 63-million-gallon impoundment basin where it stays for five days while solids settle to the bottom and are removed.  A coagulant (chemical to help solids come together so they can more easily be removed) is then added and the water goes through a series of mixers called flocculators.  This takes 30-45 minutes and prepares the water for the stilling wall, which allows the water to pass into the settling basins.  The process slows down at this point.  A majority (up to 95%) of the floc – the heavy particles – settles to the bottom, leaving the cleaner water at the top.  This usually takes three to five hours. Then, the settled water receives ozone for primary disinfection.

Next the water is filtered where a majority of the remaining particles are removed. Additional chemical treatment happens next. Fluoride is added to help prevent tooth decay, sodium hydroxide (caustic) is added to increase pH, phosphate is added for corrosion control and chlorine and ammonia are added to form chloramines which function as the secondary disinfection in the distribution system.

Finished water is then pumped into two three-million gallon ground storage tanks and then into the distribution system, which includes our customers’ homes and businesses and two elevated tanks. Together, the two elevated tanks have a total storage capacity of 2.5 million gallons.  One of the tanks is located near Wal-Mart; the other is near the intersection of Greenville Blvd. and Fourteenth St. Extension.

In addition to surface water we also have eight groundwater deep wells that have a combined capacity of 2.0 mgd. This water is pumped out of the ground disinfected and pumped directly into the distribution system. In years past, the wells were relied on daily to provide supplemental water to meet the demands of the system. Today, with the WTP capacity at 22.5 mgd, the wells are used more as a tool to meet peak demand.